It's been a while! Sorry for the lack of updates over here - there's a lot more going on over at our facebook page but I prefer to stick to only more important updates on the blog proper. Today, I've got a doozy for you!

There's been a few things which needed doing on the figure before it could be sent off - I realised the torso joint would expose the mechanics the second it was moved in any direction, so we had to completely redo the torso joint. He's now got a more standard ab crunch found in figures like Marvel Legends and DC Universe Classics. To keep it possible to disassemble for sculpting work, it moves around an M3 bolt and has a handy hexagonal fitting to keep the nut in place. The twist is now handled by a seperate joint at the waist, around the level of the belly button. We would have loved to have had it lower on the belt line, but there's not a lot of room to play with inside with the working bits.

Nick and I have been pretty busy of late so these changes took a while to implement, but a couple weeks ago we reached the point where we were happy to sign off on our first draft of the figure! We sent him off to the good fellows of shapeways and had him printed in their standard white strong and flexible material, and he arrived at the end of last week! Naturally the first time Nick got to see him was during a fancy dress party... 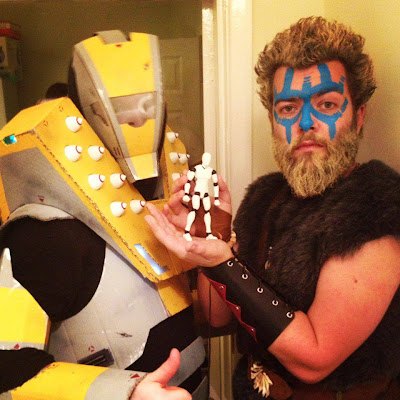 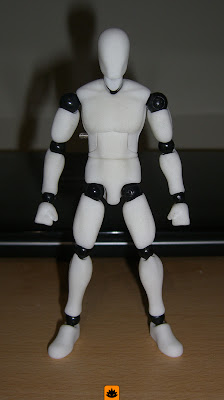 We're absolutely chuffed to bits with him. There are a few issues we've discovered, but they're little housekeeping issues for the most part, which is really encouraging! Hopefully we'll have more progress soon!
Posted by Unknown at 17:03 No comments:

So this has been concept reveal week! I've been posting up a design a day for some of our current crop of concepts. Monday's was one of mine: 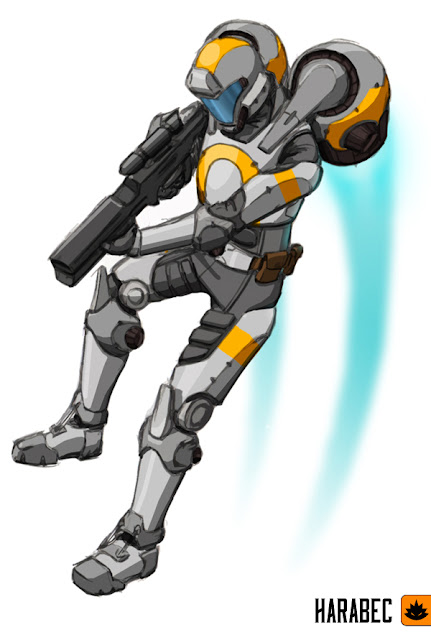 Harabec is an elite soldier of the future. Expertly trained in jetpack flight, he can rain fire down on his enemies from the skies!

Tuesday saw one of Nick's ideas! I love this guy: 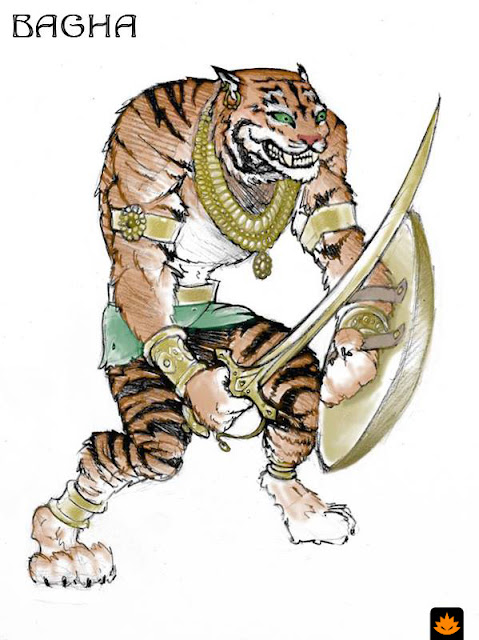 He's a tiger warrior, a prince of a forgotten kingdom! Really love this guy.

Wednesday brought us another of my designs, the Bladesman. 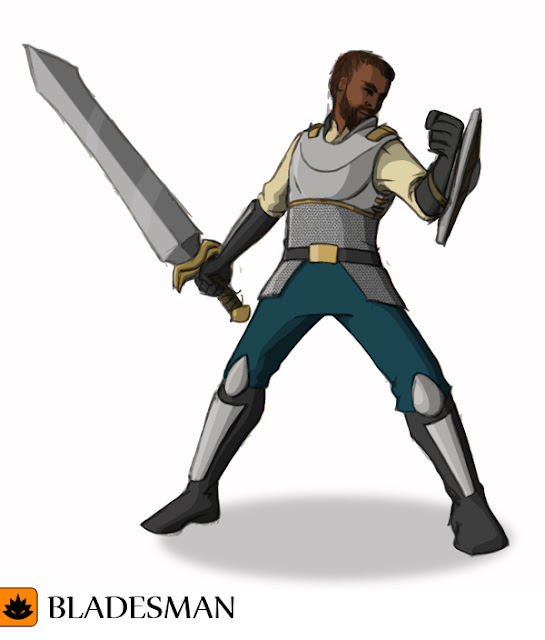 He's a noble swordsman, an expert fighter from a fantastical realm.

Thursday's design was another by Nick: 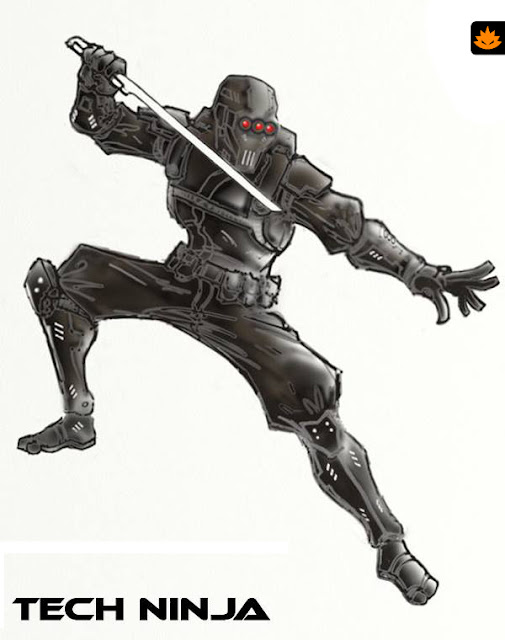 The awesome Tech Ninja! Good or bad? Assassin or hero? You decide!

Friday's design was another of mine! 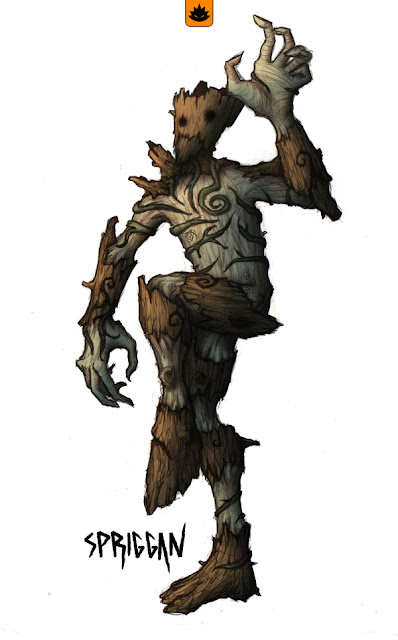 Spriggans are mischievous tree spirits, apt to steal children and replace them with changelings yet fearful of anyone wearing their clothes inside out!

And finally (for this round at least) Nick brought us: 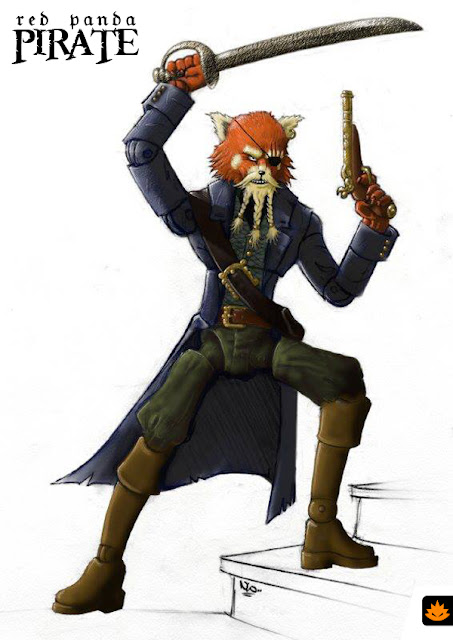 Why? Because red pandas get no action figure love!

Thanks everyone so much for keeping tabs on this post all week. We're nearing completion on the first draft of the body, and are hoping to send it out to get printed this week! I AM EXCITED.
Posted by Unknown at 12:18 No comments:

This has been on the facebook page for a few days, but I think its about time I brought it over here! Here we have the current WIP shot of our base buck. There's still work to be done on him, and we're going to get a test print soon to check he actually functions as we want him to, but he's getting there! 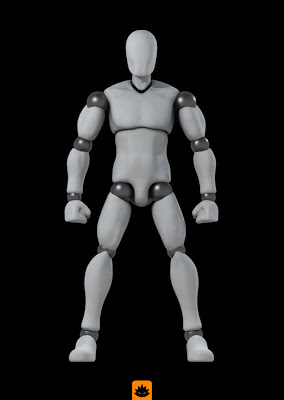 This isn't the only shot we're going to be posting over the next few days. Starting Monday, I'll be posting a character concept each day. How long for? No idea, we'll see when we run out. We may not make all of them straight away, some we may never make, but we want to show you guys some of the figures we want to make, and hopefully inspire you to get thinking of some ideas yourselves!

Also, I can't remember if I've actually mentioned this yet, but if you want to follow me on Twitter, you can! @A_HedgehogToys
Posted by Unknown at 06:06 No comments:

Lots of news today! I've had some stuff bubbling under the surface for a while now, and I'm ready to tell you some of it! Firstly, I'd like to introduce Nick Whitmore to you all. Yep, AH is now a dynamic duo!

Nick is a digital sculptor for a toy and product developer in Windsor. I've known him for years, he's one of the few people as mental for toys as I am, and he has TEH MAD SKILLZ. We've wanted to collaborate for years on a line of figures, and it's about damn time we actually did something about it! 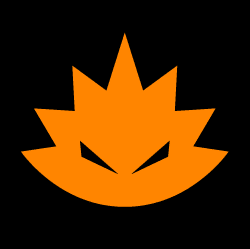 We spoke about Toycon and how we wanted to see more articulated indie toys, and fawned over the amazing communities of indie toymakers and action figure customisers. We want to bring all that together. So, that brings me on to that lil teaser picture I posted the other day; you may have noticed the various shapes are laid out in the shape of a person. That's because the picture shows the articulation plan for our figures! We're using Revoltech joints, so these guys will be hella poseable. And because of the way Revoltech joints connect, they'll be able to be completely disassembled and reassembled however you like.

We're putting a big focus on customisation. We're working on a base body, and will at some point offer that for sale. What we'd love you to do is sculpt on top of that figure and make whatever character you'd like. We're not stopping there though - we're going to be sculpting characters ourselves, in a bunch of different styles, and offering those for sale too. We've got plans beyond that too, but hey, let's not get ahead of ourselves! We're incredibly excited about this project. It's a huge undertaking but I've completed the engineering side of the figure, Nick's currently working on the digital sculpting of the body and it looks IMMENSE. We're well underway!

I'll be posting some more about this in the coming days, keep an eye out!
Posted by Unknown at 13:53 No comments:

So this'll be what I've been working on then. More information soon! 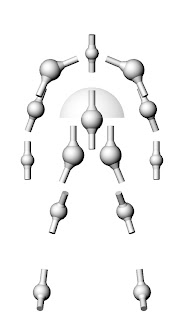 My days at the University of Hertfordshire were some of the best of my life. Being able to learn awesome skillz whilst being surrounded by likeminded people, and working on your own projects? I'd go back any day. I'm a visiting lecturer now, having given a seminar on getting into the modelmaking industry for the last four years. This year, for the first time, I was asked to lead a turbo (one week) project with the current second years.

I came up with a project which would teach and test them in a number of ways. I wanted to get them to focus on achieving a high level of surface finish, with a classy paint application. Usually, students (myself included, during my time there) will use spray cans to paint their models and leave the finish as it comes from the can. I wanted to show them how much an even sheen achieved with a lacquer can improve the quality of their models. On top of this, I wanted to get them thinking about how to get parts moving without being sloppy, and I also wanted the project to leave them with something that they might feel happy enough about to include at their degree show next year.

With only a week, it needed to be something simple. I figured I'd need to supply the toy for them to work on, or they'd run out of time. I set about designing a simple base figure in the vein of Munnys and Dunnys, with rotating joints at the neck and arms. I designed it in Rhino, and machined the master. 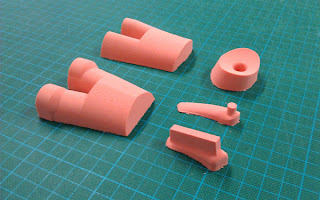 I assembled it, only doing the bare minimum of sanding before tooling it and casting. Usually I'd complete the finishing on any model before casting it, but then the students wouldn't have had enough work to do! 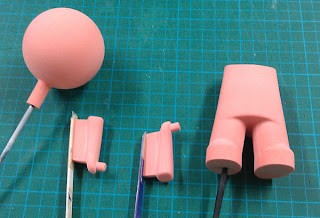 I had 20 students, so 20 casts were made, plus one extra for me. The mould was on its last legs by the end, as was I having only had three weeks between coming up with the project and starting to teach it! The students were great, coming up with interesting design ideas and taking on board the advice I offered. It was a pleasure to teach such a great bunch! 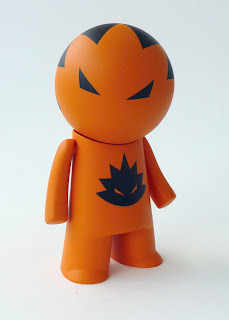 My 'demo piece' (yeah, I just wanted to do one myself).

For those on facebook, I've now got one of those fancy pages on there so I can annoy you while you're trying to be sociable/stalking people!
Posted by Unknown at 14:29 No comments: